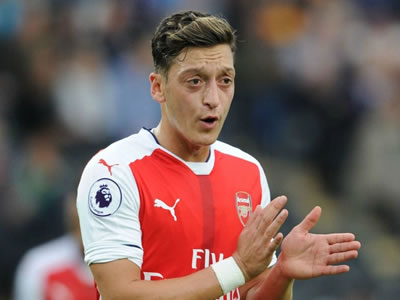 Ozil’s current deal is set to lapse in 2018, but reports say the player’s new deal would tie him to the Emirates till 2021. Truly, Ozil could sign the deal, protecting his future, yet seek a return to Madrid in the coming summer.
Arsenal Manager Arsene Wenger had already admitted that talks with Ozil were in the pipeline, but nothing has been formalized. Bild had earlier reported that Ozil relishes the opportunity to return to Madrid, so only time will tell if the report is true.
END_OF_DOCUMENT_TOKEN_TO_BE_REPLACED

the-graphics-card.com I have made my first site for gamers, the site offers the best sales on hardware promoted by me from amazon. I can add any product to the site tell me what you think http the facebook page will have regular posts updating you about the latest gaming gear sales any recommendations will be appreciated Sports, Amazing, Soccer, Football, Cool, Extreme, Sport (Industry), Freestyle, Skills, Grace, SPORT (magazine), Association Football (Sport), Amazing (Kanye

Hey youtube this is my first Freestyle video which is made of a lot of clips from last year, and a few from 2012 hope you will enjoy it